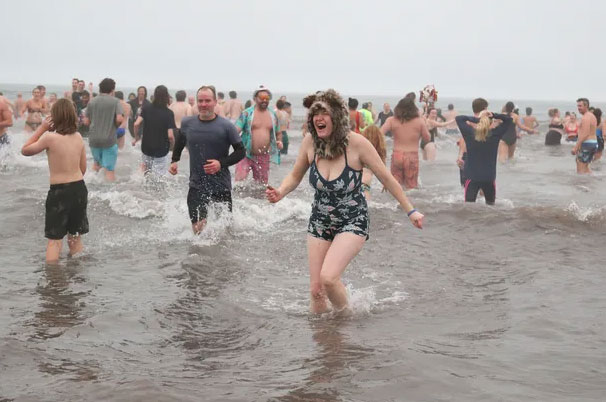 The first day of 2023 will be special for many reasons. For one group of brave souls, they will head to the ocean for a great cause while helping two local kids who are battling life-threatening illnesses.

The Warwick-based A Wish Come True, the oldest wish-granting organization in Rhode Island and Massachusetts, will host its annual Polar Plunge at Easton’s Beach in Newport on Sunday, Jan. 1, from noon to 3 p.m. Parking is expected to be limited.

There will a pre-event buffet and post-plunge reception for participants and guests at Rejects Beer Company, 124 Aquidneck Ave., Middletown.

This year’s “Wish Kids” are Riley, a 14-year-old from Warwick, and Mark, a 13-year-old from Seekonk, Massachusetts. Both wish to travel to Florida to visit Disney World, Universal Studios and Sea World.

“Often, people don’t realize they are donating to help make dreams come true for children with a life-threatening illness. This event features close to 5,000 people willing to head into the water and be ‘freezin’ for a reason’. This day also hosts a special guest,” AWCT Executive Director Mary-Kate O’Leary said in a statement.

“We are honoring one of the original ‘Polar Bears’, Charlie Wright, who has taken the plunge over 48 years,” said O’Leary, whose organization celebrated its 40th year in 2022. “We are thrilled to have him lead the way and inspire our attendees to have fun and enjoy the water.”

Wright joined the Polar Bears through a friend in 1969. He said several colleagues, including Jack Morgan, Henry Walker and Eddie Sullivan, were part of a softball team that won a championship. He was told that if they won, he would have to jump into Easton’s Beach with them. Back then, it was a small group of individuals who would take the Plunge every Sunday at noon. Despite his trepidations, Wright went through with the event, and continued doing so until five years ago.

Wright has some interesting tales about getting to the beach. Many of them began with dealing with little or no traffic, cold weather and freezing water temperatures. From there, some of the stories took on lives of their own.

“We had a Middletown police officer stop and ask what we were doing as we changed into our bathing suits. We told him, and he just said he didn’t want anything to do with why we were there. We had to walk over high snow drifts at Johnny’s Restaurant because the beach hadn’t been plowed out.

“When we got into the water, the rule was that you had to be completely wet,” Wright continues. “We would become completely covered in ice. We also walked on frozen seaweed and had to keep our feet on the ocean floor so we knew where we were.”

As for partnering with AWCT, Wright said AWCT reached out to Wright and the group 19 years ago to make this a yearly fundraiser. The group agreed, and it slowly gained popularity and now has close to 5,000 people participating and watching. Last year, the event raised $45,000.

Wright said the best part of the event was meeting the kids and families who received their generosity.

“The organization would bring the child and their family to meet with us and take pictures. We could see first-hand where the money was going and who it helped in our community. It was a gratifying moment for everyone involved,” he said.

Wright kept mum on whether he will enter the water on event day. If Wright chooses not to, then he will be well represented by his grandson and granddaughter, who have taken the plunge for several years.

There are several ways the public can help, according to O’Leary. Sponsors can help financially starting at $100 with a “Freezin’ for a Reason” level with other sponsors for $250 (Polar) $500 (Bronze) $1,000 (Silver) $2,500 (Gold) and $5,000 (Presenting) with accompanying benefits at each level. Most importantly we want people to attend and have a great time. Plungers will be encouraged to give $20 to take the big plunge. In addition, there will be t-shirts, towels and blankets for sale. You can also form a team online at www.awish.org. The team that raises the most money receives a trophy!

“Take the Plunge and join us at Rejects Beer Co. after to honor Charlie Wright,” O’Leary said.

For those who are unable to attend but want to help, AWCT has two outlets for people to donate. They can either go to Venmo and give at @awishcometrue or visit www.bidpal.net/19thannualpolarplunge to make a pledge.